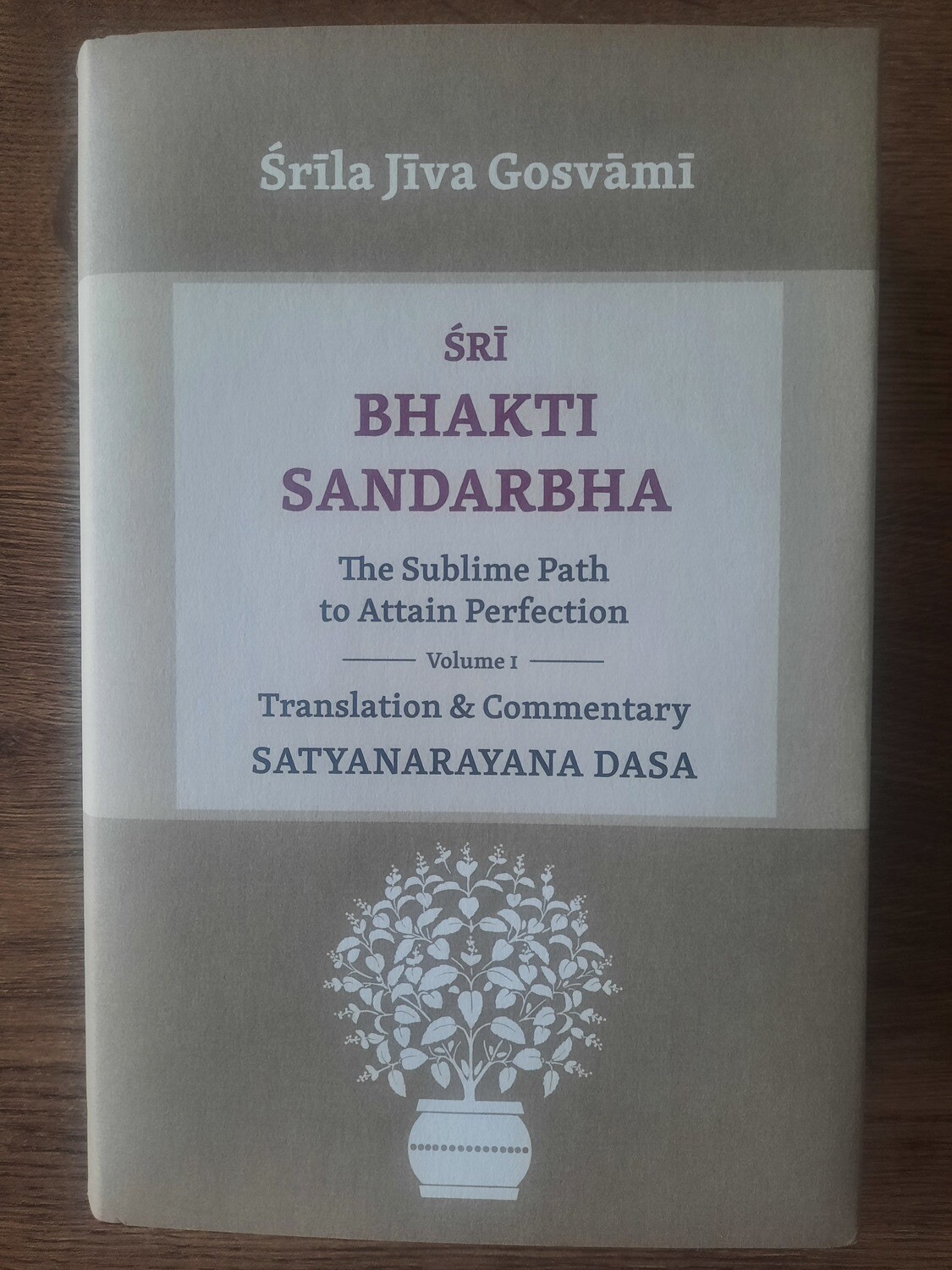 This new edition has been printed in Germany and is now available in Europe (orders from non-EU customers are also very welcome but delivery may thus take longer).

Bhakti Sandarbha, which is the fifth volume in the anthology, deals with abhidheya, the prescribed method to actualize our relation with Bhagavān. Based upon the study of Bhāgavata Purāṇa, this method is ascertained as bhakti to Kṛṣṇa. Earlier, bhakti was generally considered as one of the spiritual processes along with karma-yoga, jñāna-yoga, and aṣṭāṅga-yoga. Moreover, it was usually taken as a precursor to jñāna, which ultimately leads to liberation. Rarely was it recognized as an independent process by itself. In contrast to this, Śrī Jīva Gosvāmī asserts that bhakti is the only abhidheya worth following and that all other processes are futile without it, like the thrashing of empty husks to obtain rice. Other practices have a lasting significance only if they are graced by bhakti.

Bhakti Sandarbha stands out as the center of all the Sandarbhas. The first four provide the theoretical underpinnings that lead to it, and the last one elucidates its outcome in the form of divine love (prīti). Bhakti Sandarbha is also the most practically oriented out of the complete set, because it provides the method to be followed in one’s life. As far as a sādhaka is concerned, the other five offer only a theoretical understanding, which is however essential for authentic practice. Thus, although each of the other Sandarbhas have their own specific role and importance, ultimately it is only Bhakti Sandarbha that is the beacon light in one’s day-to-day life.

Bhakti Sandarbha places bhakti on the highest pedestal, which it rightly deserves. Earlier, bhakti was considered only as a means for liberation. Śrī Jīva Gosvāmī, however, on the strength of scriptural authority, establishes that bhakti is the supreme process as well as the ultimate goal. All other processes cease after delivering their respective results, but bhakti continues even beyond videha-mukti, or ultimate liberation. Śrī Jīva Gosvāmī goes on to say that without the grace of bhakti, all other processes are impotent. Bhakti, being the intrinsic potency of Bhagavān, is complete by itself and does not depend upon anything. It was propagated by Bhagavān Himself at the beginning of creation. Whatever a person wishes to attain—material or spiritual—can be attained through bhakti. Everyone is eligible to engage in bhakti irrespective of their status, gender, age, nationality, or education. Only bhakti awards direct realization of Bhagavān. Indeed, Bhagavān becomes controlled by His devotee.

Therefore, anyone who is serious about becoming a pure devotee of Bhagavān, especially of Śrī Kṛṣṇa, should study Bhakti Sandarbha thoroughly.

Save this product for later
Display prices in: USD